There’s again news that user account database is available in the Internet. Now it is about Windows Live Mail users. The origin says that more than 10000 passwords of Hotmail user accounts are in public access. I could not miss it, and brief googling leads me to the true origin. Now pastebin.com server operates unstably but google cache works perfectly:) 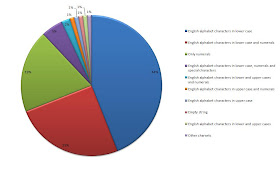 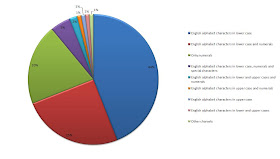 As you can see, the graphics are almost identical.

Comparing with similar data on corporate users [1] and user passwords from VKontakte social service [2], the diagram is the following:

Assuming that the most part of Hotmail users are foreign Internet users, we can see the difference in how Russian and foreign users choose passwords. Our nationals prefer numerals but foreign users prefer English alphabet characters in lower case. On the other hand, Russian users choose longer passwords.

Here’s TOP50 of the most widespread passwords for Hotmail user accounts:

If we analyze the list of the most widespread passwords in Hotmail accounts, we can see that very often user name is used as a password. However, numeral combinations 123456, 1234567, 12345678 and 123456789 are in TOP10, as in used passwords statistics in Russian companies. They are considered as leaders among the "most favorite passwords for users all over the world" :)
Unknown at 1:34 AM
Share